My thoughts and ideas

Before we can view our alignments in the IGV browser we need to index our BAM files. We will use samtools index for this purpose. For convenience later, index all bam files.

Optional (specific to AWS - does not currently work on Compute Canada):

Try to create an index file for one of your bam files using a samtools docker image rather than the locally installed version of samtools. Below is an example docker run command.

Start IGV on your laptop. Load the UHR.bam & HBR.bam files in IGV. If you’re using AWS, you can load the necessary files in IGV directly from your web accessible amazon workspace (see below) using ‘File’ -> ‘Load from URL’.

If using Compute Canada, you can log in to Jupyter notebook as described here and download the alignments to your local computer. Once you have downloaded these files, you will want to load them into IGV using ‘File’ -> ‘Load from file’.

You may wish to customize the track names as you load them in to keep them straight. Do this by right-clicking on the alignment track and choosing ‘Rename Track’.

Go to an example gene locus on chr22:

Try to find a variant position in the RNAseq data:

Using one of the variant positions identified above, count the number of supporting reference and variant reads. First, use samtools mpileup to visualize a region of alignment with a variant.

Create faidx indexed reference sequence file for use with mpileup

Run samtools mpileup on a region of interest

Each line consists of chromosome, 1-based coordinate, reference base, the number of reads covering the site, read bases and base qualities. At the read base column, a dot stands for a match to the reference base on the forward strand, a comma for a match on the reverse strand, ACGTN for a mismatch on the forward strand and acgtn for a mismatch on the reverse strand. A pattern \+[0-9]+[ACGTNacgtn]+ indicates there is an insertion between this reference position and the next reference position. The length of the insertion is given by the integer in the pattern, followed by the inserted sequence. See samtools pileup/mpileup documentation for more explanation of the output:

Now, use bam-readcount to count reference and variant bases at a specific position. First, create a bed file with some positions of interest (we will create a file called snvs.bed using the echo command).

It will contain a single line specifying a variant position on chr22 e.g.:

Now, run it again, but ignore stderr and redirect stdout to a file:

Assignment: Index your bam files from Practical Exercise 6 and visualize in IGV.

Solution: When you are ready you can check your approach against the Solutions.

Description of the lab Welcome to the lab for Genome Visualization! This lab will introduce you to the Integrative Genomics Viewer, one of the most popular visualization tools for High Throughput Sequencing (HTS) data.

Lecture files that accompany this tutorial:

After this lab, you will be able to:

Things to know before you start:

This tutorial was intended for IGV v2.3, which is available on the IGV Download page. It is strongly recommended that you use this version.

Visualization Part 1: Getting familiar with IGV

We will be visualizing read alignments using IGV, a popular visualization tool for HTS data.

First, lets familiarize ourselves with it.

Get familiar with the interface

Load a Genome and some Data Tracks

By default, IGV loads Human hg19. If you work with another version of the human genome, or another organism altogether, you can change the genome by clicking the drop down menu in the upper-left. For this lab, we will be using Human hg19.

We will also load additional tracks from Server using (File -> Load from Server...): 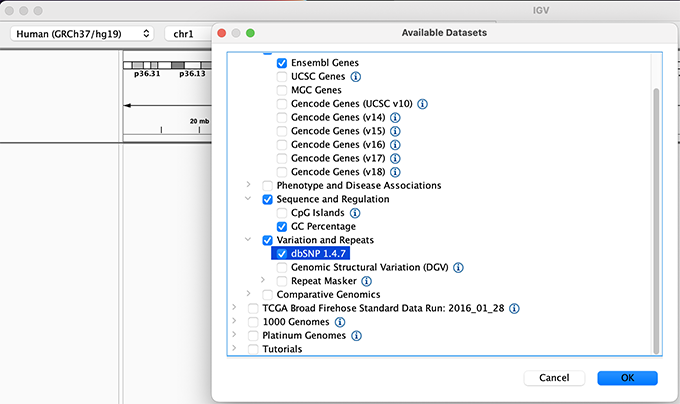 You should see listing of chromosomes in this reference genome. Choose 1, for chromosome 1.

Navigate to chr1:10,000-11,000 by entering this into the location field (in the top-left corner of the interface) and clicking Go. This shows a window of chromosome 1 that is 1,000 base pairs wide and beginning at position 10,000.

IGV displays the sequence of letters in a genome as a sequence of colours (e.g. A = green, C = blue, etc.). This makes repetitive sequences, like the ones found at the start of this region, easy to identify. Zoom in a bit more using the + button to see the individual bases of the reference genome sequence.

You can navigate to a gene of interest by typing it in the same box the genomic coordinates are in and pressing Enter/Return. Try it for your favourite gene, or BRCA1 if you can not decide.

Genes are represented as lines and boxes. Lines represent intronic regions, and boxes represent exonic regions. The arrows indicate the direction/strand of transcription for the gene. When an exon box become narrower in height, this indicates a UTR.

When loaded, tracks are stacked on top of each other. You can identify which track is which by consulting the label to the left of each track.

Sometimes, it is really useful to save where you are, or to load regions of interest. For this purpose, there is a Region Navigator in IGV. To access it, click Regions > Region Navigator. While you browse around the genome, you can save some bookmarks by pressing the Add button at any time. 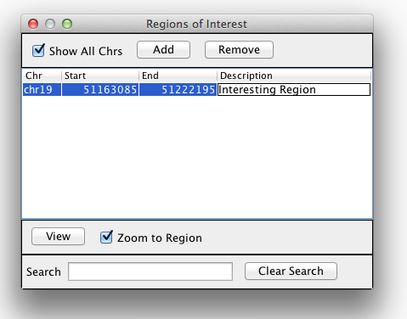 We will be using the breast cancer cell line HCC1143 to visualize alignments. For speed, only a small portion of chr21 will be loaded (19M:20M).

Copy the files to your local drive, and in IGV choose File > Load from File..., select the bam file, and click OK. Note that the bam and index files must be in the same directory for IGV to load these properly.

To start our exploration, right click on the track-name, and select the following options:

Experiment with the various settings by right clicking the read alignment track and toggling the options. Think about which would be best for specific tasks (e.g. quality control, SNP calling, CNV finding).

Changing how read alignments are sorted, grouped, and colored 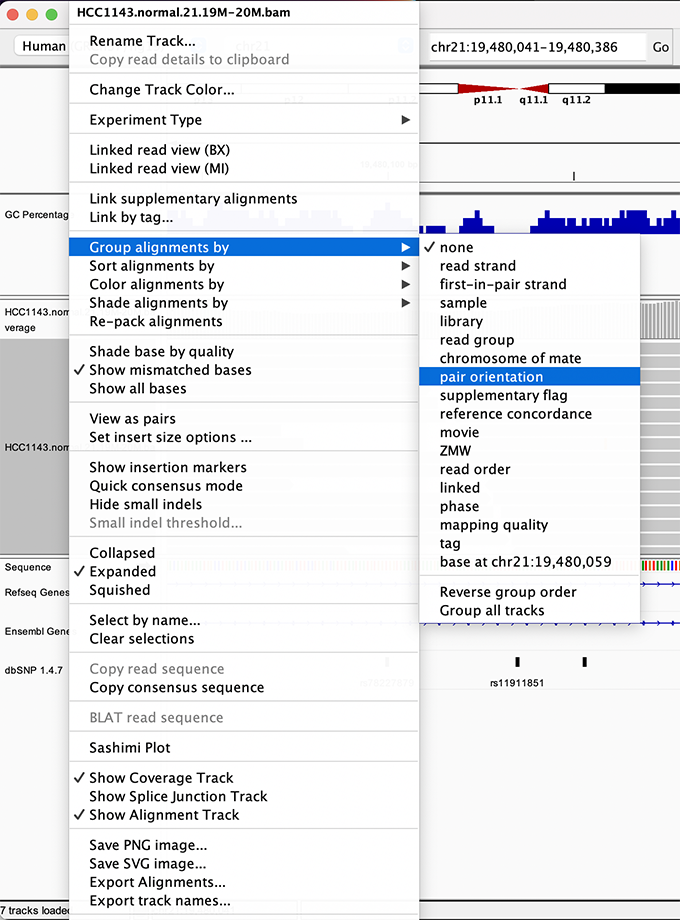 You will see reads represented by grey or white bars stacked on top of each other, where they were aligned to the reference genome. The reads are pointed to indicate their orientation (i.e. the strand on which they are mapped). Mouse over any read and notice that a lot of information is available. To toggle read display from hover to click, select the yellow box and change the setting.

Once you select a read, you will learn what many of these metrics mean, and how to use them to assess the quality of your datasets. At each base that the read sequence mismatches the reference, the colour of the base represents the letter that exists in the read (using the same colour legend used for displaying the reference). 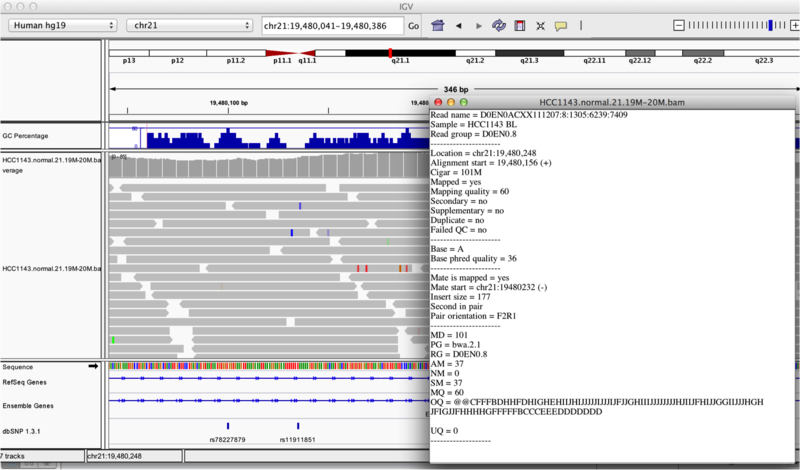 In this section we will be looking in detail at 8 positions in the genome, and determining whether they represent real events or artifacts. 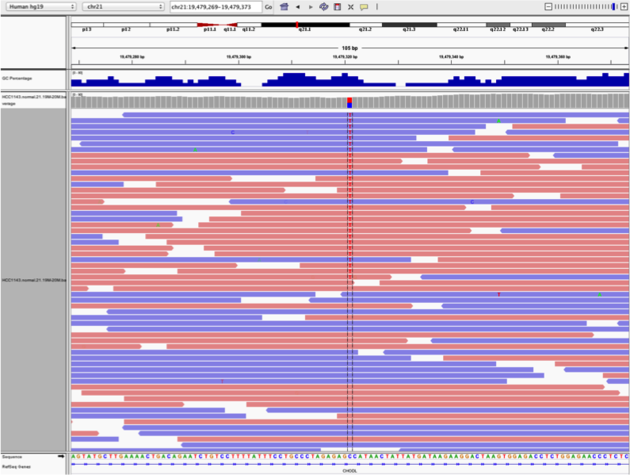 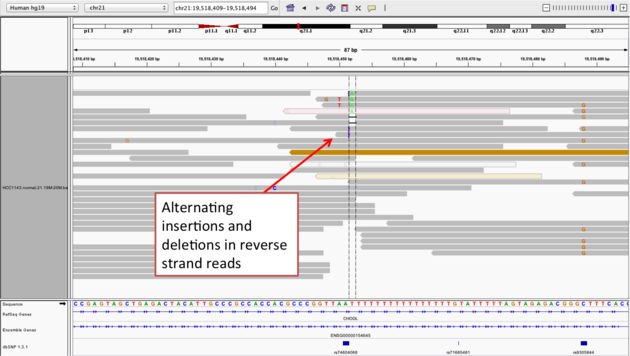 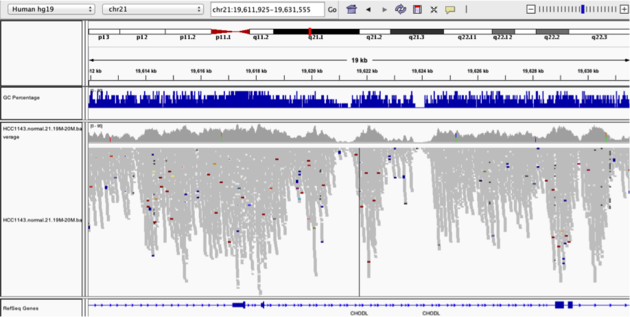 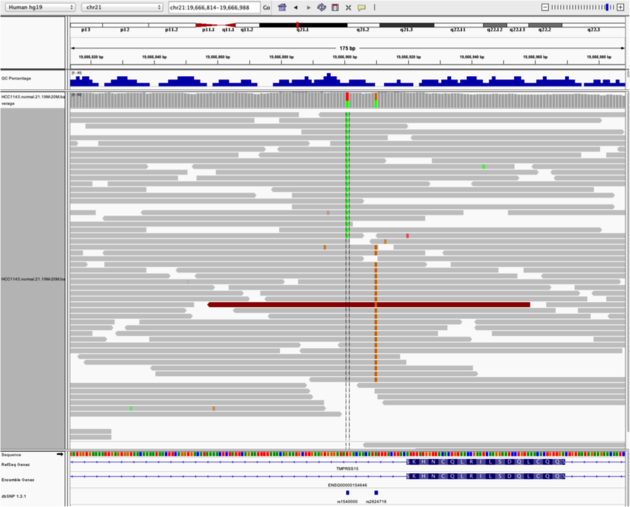 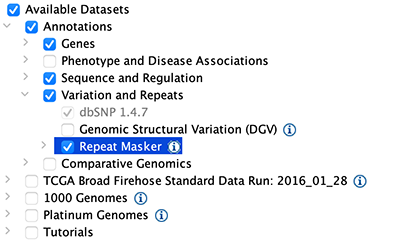 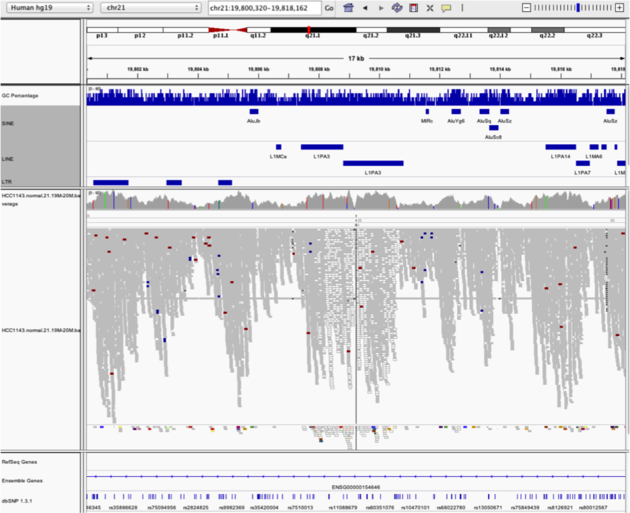 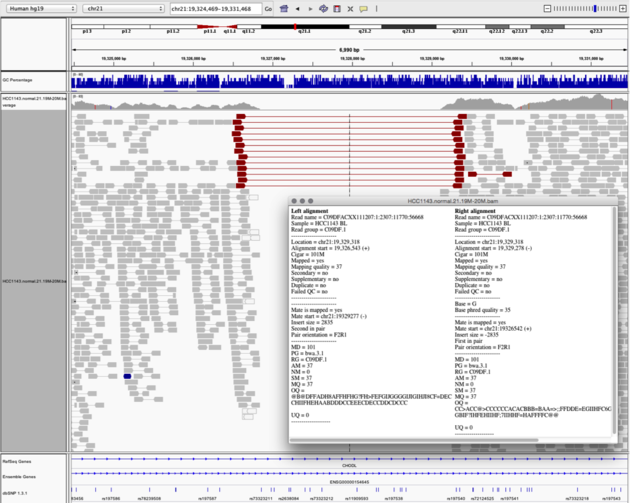 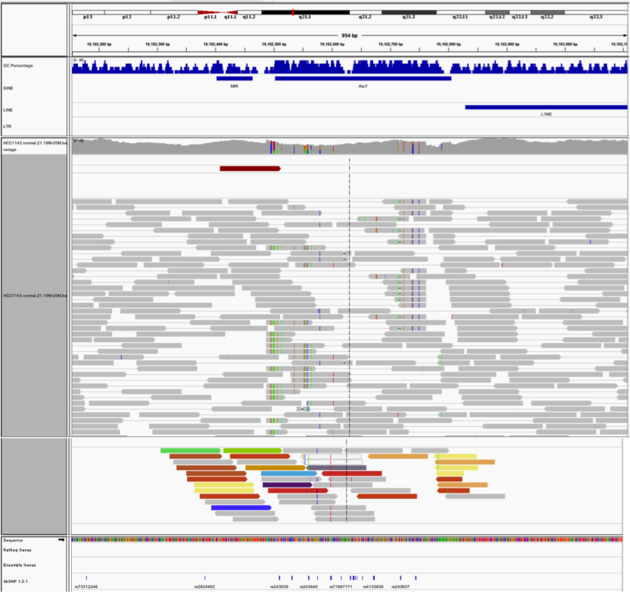 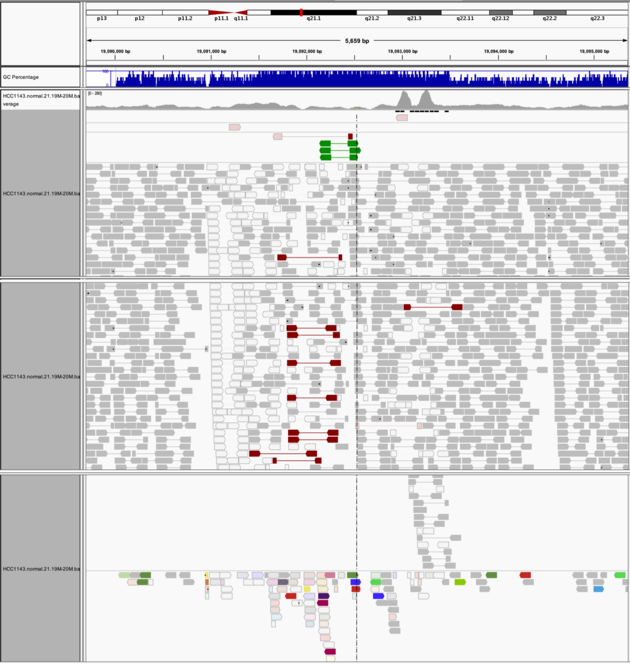 We can use the Tools menu to invoke running a batch script. Batch scripts are described on the IGV website:

Download the batch script and the attribute file for our dataset:

Now run the file from the Tools menu: